Caliper Bolts…To Grease or Not to Grease..

Preparing to change the brake pads on your newly bought second hand car and you discvover the caliper bolts have been rounded off. Mmmhh. Do you cover them in WD40 and have another slice of cake or….? Eventually you get them out and anxious they don’t seize again cover the threads in grease – copper grease like as not as it’s apparently anti-seize. But should you?

Might be worth considering how a bolt ‘works’ with apologies to the engineers amongst you…visit BOLT science at http://www.boltscience.com/pages/screw4.htm if it’s a quiet day at home.

The pitch of the thread and other features of the bolt determine how well it will function. Engineers don’t just pick any bolt for the job,due consideration is paid to the conditions the bolt will operate under. For example certain thread designs perform better when the bolt will be subject to extreme vibration or exposed to multiple cycles of heating and freezing. On a car great thought has been given to the type of bolt to be used – the bolt thread and material has been designed for the purpose in mind.Think about the stress and strain undergone by engine head bolts. On the Delica 2.5 diesel engine – as on other engines – the head bolts have to be torqued not only to a specific value but in a strict sequence to avoid non uniform stress being applied to the alloy head. On the Mitsubishi 4M40 engine the head bolts are ‘stretch’ bolts and are deisgned to be used once only. They are torqued up to around 200Nm and then down to a lower value – around 125Nm. Genuine Mitsubishi bolts are engineered with this process in mind and cost close to £100 I believe. You can buy a non genuine set for £20 which look identical but are they made of a material which could withstand 100,000 miles? Similarly lots of non genuine caliper pin bolts are available for the Pajero or Delica. This is why manufacturers void warranties if non genuine parts are used. They have invested in finding out through trial and error the right materials to use – even down to the correct material and pitch of the bolts.

Returning to our theme – if you slap a dollop of grease on a caliper bolt thread you are changing the specification of the bolt – i.e it’s ability to do the job it was engineered for at the given torque setting. The grease has changed the level of friction between the bolt and thread surface – it has reduced it so making it more likely the bolt will undo. To compensate for this you would need to torque it to a higher value – how much higher?  The tendence seems to be to over tighten bolts on calipers – the belief being better safe than sorry I’ll give it an extra half turn with the ratchet. But you wouldn’t have needed to if you hadn’t greased the thread and changed the bolt specification. Caliper bolts tend to seize because they are exposed to salt are are invariably over tightened. Get a torque wrench, find the torque setting of the bolts on your vehicle caliper bolts and set them to that value. You’ll be surprised at how low the torque is – this is because the thread of the caliper bolts is doing the work as it was designed to do aided by the friction between thread and bolt. So, you shouldn’t lube the thread if you’re using OEM bolts and tightening to the right value. However..

The ProSlip Honda Stepwagon has covered over 100,000 miles mainly in Japan. The lack of salting on the roads and climate means the calipers are in excellent condition. The Japanese are not to be found on their driveway Sunday morning changing brake pads, oil or anyhting else – they religiously get their cars serviced usually at the main dealer. The Honda technicians have not greased the caliper bolts on the Stepwagon.

An aviation disaster was narrowly averted in 1990, when a wrongly-installed panel of the windscreen on British Airways Flight 5390 fell out, causing the plane’s cockpit to decompress and its captain to be pulled halfway out of the aircraft at over 17,000 feet. Less than 15 minutes into the flight, with the plane at 17,300 feet over Oxfordshire, there was a loud bang in the cockpit, and the windscreen on the captain’s side blew out from its mooring, causing immediate decompression.

Both pilots had loosened their harnesses, and Captain Lancaster was forcefully pulled toward the open window by the rush of air –  the whole top half of his body was dragged out of the plane, with only his legs remaining inside, caught on the flight controls.The cause was traced to incorrect bolt selection by a maintenance engineer…… 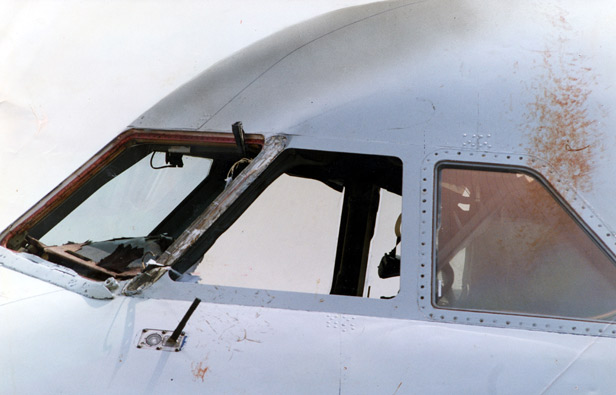